The 2018 UALA fall clean up was a great!  Every year the UALA partners with the Muncie Sanitary District to pick up trash on the Ball State University campus. 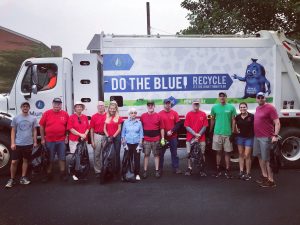 The 2017 UALA fall clean up was a beautiful day! We picked up 11,640 pounds of trash! Every year the UALA partners with the Muncie Sanitary District to pick up trash on the Ball State University campus. 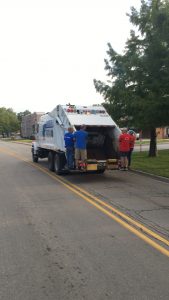 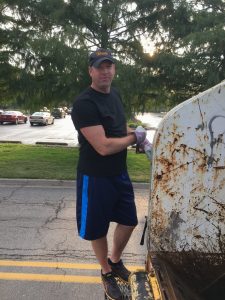 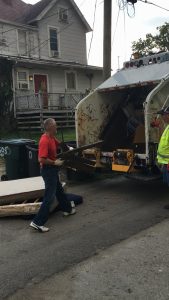 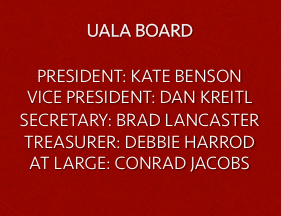 October 18, 2016 – Fall Meeting | Elected 5 Board Members for 2017- Kate Benson (President), Dan Kreitl (Vice President), Brad Lancaster (Secretary), Debbie Harrod (Treasurer), Conrad Jacobs (At Large). New Items- Transitioning new board members.  THANK YOU to Eldon & Steve Buck for starting the University Area Landlord Association in 2004.  We appreciate all of your hard work and time.  We can only hope to continue your legacy in the future of the UALA. 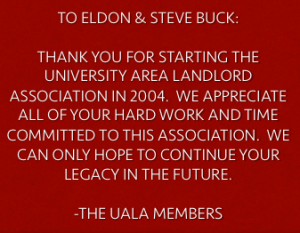 The 2016 UALA fall clean up was a soggy event!  Every year the UALA partners with the Muncie Sanitary District to pick up trash on the Ball State University campus. 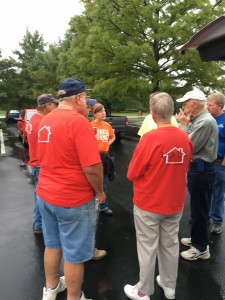 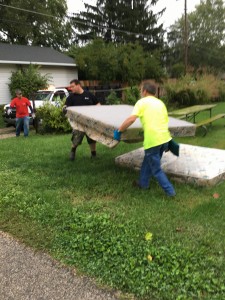 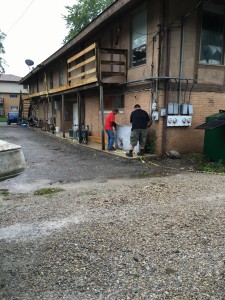 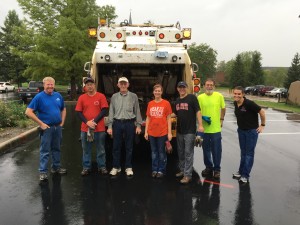 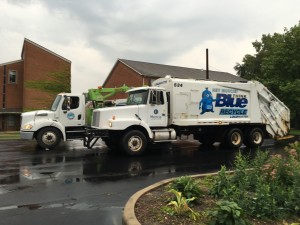 The two $1,000 scholarship award winners for 2015 were Collin Thompson and Blake McBee.  CONGRATULATIONS TO THE 2015 WINNERS!

Colin Thompson is currently the secretary of the RPMA, and will be serving as president next year.  He is a Residential Property Management Minor with minors in Real Estate Development and Consumer Finance.  Colin is also the Wes-Del junior high head football coach and assists with the Wes-Del high school varsity football team.  Colin is also found at the Muncie Boys and Girls Club once a week for a few hours. 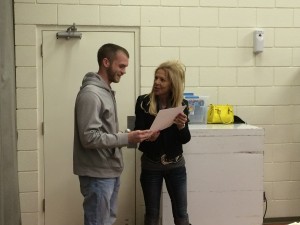 Blake McBee is currently a junior majoring in Residential Property Management with a minor in Business Administration.  He is an executive member on Residential Property Board, and is scheduled to graduate a semester early.  Blake has also worked for a property management company, and in leasing at an apartment community. 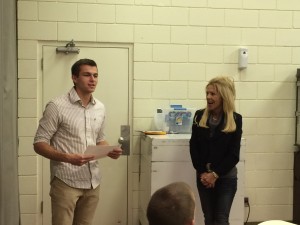 Please find all information for scholarship applications below, to view larger please click on the image. 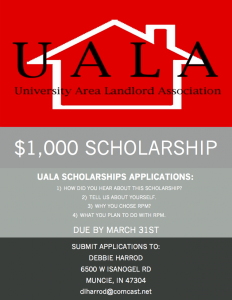 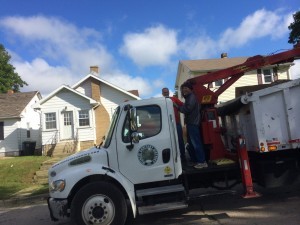 April 22, 2014 – Spring Meeting | Scholarship presentation by Debbie Harrod.  Kaylon King was awarded the $1,000 UALA scholarship for 2014.  Kaylon was chosen for several reasons, she is a junior at Ball State University, a member of the Institute of Real Estate Management, US Green Building Council, National Apartment Leasing Professional, LEED Green, and Vice President of the Residential Property Management Association. 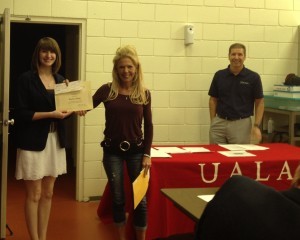 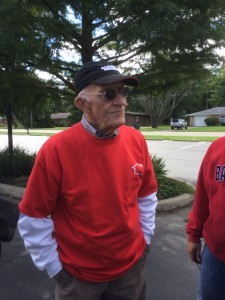 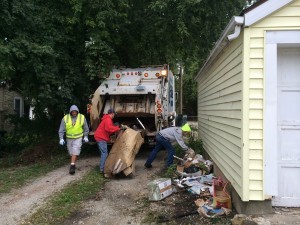 October 27, 2011 – Fall Meeting | New Items-UALA members decide to fund one annual scholarship of $500 for a Ball State student majoring or minoring in Residential Property Management.  PREVIOUS ITEMSApplicants that are interested in applying for the scholarship should include the following:  a) Tell us about yourself, b) Why you chose RPM? c) What you plan to do with RPM.  Applications can be mailed to:  Debbie Harrod | 6500 W Isanogel Rd | Muncie, IN 47304 OR e-mailed to dlharrod@comcast.net.  Applications should be received by March 31st every year. 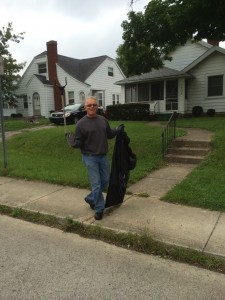 April 21, 2009 – Spring Meeting | New Items – Daily News Advertising with  funds, add two and a half months for 3.5 inch.  Advertising plan for UALA for the future.

October 9, 2008 – CLEAN & BEAUTIFUL AWARD BREAKFAST | Eldon Buck, accepted on behalf of the UALA, a certificate for placing 2nd in the Spring clean up and 1st place plaque for the Fall clean up. 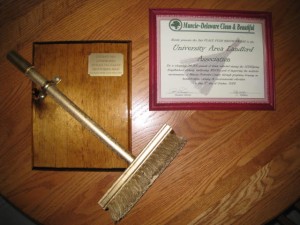 September 15, 2007 – FALL CLEANUP DAY – Thanks to all that participated in the Annual Fall Cleanup on 9/15/2007. We were able to collect 17,300 pounds of garbage and again make a noticeable difference in the appearance of the area surrounding the Ball State campus. The amount of weight collected is somewhat lower than in the past which is an indication that the area is much better than in past years. We even got a compliment from the Muncie Sanitary District (and I quote), “The area appears cleaner than it has been in years. Thanks to your organization. With your help, it enables us to do a better job.“

OCTOBER 24, 2006 MEETING – 2006 expenses were reviewed and the budget for the coming year was voted on. Steve Buck intimated that a number of city officials have given us praise and also indicated that complaints in the area have been greatly reduced. Brad Lancaster was voted in as our newest board member.

SEPTEMBER 16, 2006 CLEAN-UP – Most of our focus was in the alley ways. With two regular garbage trucks and one claw truck, we again made a visible difference in the amount of garbage and debris in the target area.

DOOR HANGERS – The UALA along with the CCC and BSU distributed door hanger in the immediate area surrounding the Ball State Campus. The information in these packs is designed to provide pertinent information to students that might be new to living in off-campus housing. It is also designed to remind veteran off-campus dwellers of available services. This information is also intended to remind the students of their role in making sure that trash, noise, and parking do not get out of control.

MAY 20, 2006 CLEAN-UP DAY – We had a great day and avery good turn out. All in all we collected 34,800 pounds of garbage and debris making a visible impact in the area.

STUDENT HOUSING EXPO – January 18th, 2005 – BSU held a Student Housing Expo which we were able to be apart of on a extremely short notice. Thanks to Eldon Buck for pulling it all together in one day. Also a warm thank you to Brad Lancaster, Greg Whitback, Chris Conner, and Brian Peterson for helping man the table.

We were able to set up a table for the sole purpose of promoting the UALA.  It was definitely a success for our first year participating.  However, we did come up with some great ideas for next year, which we will discuss at our membership meeting next Tuesday.  An estimated 200-250 students visited, and most of them were dorm students looking for off campus housing for next year.

In the past, most of the exibitors have been representatives of the apartment complexes.  With our presence there, we can promote our housing.

II. Review Process for Distribution of UALA Window Stickers – Window stickers will be distributed at the next meeting (Monday, September 12, 2005 at 6:30p.m.). For each “Rules and Regulations” completed and returned, each member will receive one sticker.

III. Review how important it is for every UALA property to maintain our minimum standards. Once stickers are distributed and placed on our properties, we simply cannot allow properties to not uphold our standards. Everyone was reminded of the hotline, as well as the importance of us self-patrolling the exterior of our properties.

IV. Follow-up report on UALA’s May 21st Campus Clean-up Day. As a group we collected 24,900 pounds of trash in the short time we worked.  Thank you to those UALA members participated.

V. The City of Muncie’s New Parking Ordinance – Schuduled to go into effect August 15th. The lack of support displayed through weak attendance was discussed. There are other issues looming that we cannot wait until the last minute to push back on. We need to show strength and solidarity all along the way. Thanks to those who made it to the meeting.

VI. City Officials Q & A Session – Mayor Canan, Jerry Friend, and City Councilman David Taylor were gracious enough to attend our meeting and answer questions from those that attended. Various questions were posed that included: occupancy issues, parking problems, trash problems, trash collection issues, how we as a group can help the city and variety of others. The Mayor discussed the lack of funds provided by Ball State for important issues and how that impacts our property taxes.

A number of the members of the U.A.L.A met in the parking lot at the corner of New York and Riverside at 8:00am. The members were divided into four groups and each group was assigned a zone or section to clean-up. Collectively the group picked up 24,900 pounds of trash and debris that was then hauled away by garbage trucks and city employees, provided by the City of Muncie. The U.A.L.A. would like to thank the City employees for their help and also thank you to the City for providing trucks to haul the garbage.

The meeting lasted approximately from 6:30pm to 8:55 to discuss the progress made by the various committees and vote on a number of items, which are outlined in the agenda below.

I. Welcome – Steve Buck gave a brief outline of the agenda with names people that would be speaking about each of the topics.

II. Overview of U.A.L.A. By-Laws – Steve Buck discussed the by-laws and suggested a minor geographic change which was voted on and accepted.

III. Election of Board of Directors (5) – Steve Buck indicated his desire to include Chris Conner as a possible choice to the elections. The election was then held.

VI. Present and Vote on the U.A.L.A. Window Sticker – Kyle Evans presented the revised prototype of the U.A.L.A. sticker. It was well received by those that attended and voted in as the final version. It was agreed that there would be a blank white spot for both the member number and member’s phone number. It will be up to the landlord to write in their phone number if desired or not.

VII. Present and Approve the U.A.L.A. Brochure – John Zgunda presented the color version of the door-hanger insert, which was unanimously approved. This should prove to be a great marketing tool our members and the U.A.L.A. itself.

VIII. Present and Approve the U.A.L.A Website (http://www.ualaonline.org) – Chris Conner gave a PowerPoint presentation to show the website in its current state. A few of the pages were reviewed with regard to content. Of those the members page will show a list with phone number, email address, and website link for those members who wish to be included.

IX. Update on Recent Developments with the City of Muncie

– Eldon Buck discussed his work with the Campus and Community Coalition

The UALA met from 6:30p.m. to approximately 8:45p.m. to discuss and vote on the following topics:

I. Name and Proposed Mission Statement – The group came to an agreement to accept the mission statement as is appears below.

The University Area Landlord Association consists of landlords dedicated to providing clean, safe, and well-maintained student-rental housing in the neighborhoods surrounding Ball State University. At the foundation of our housing standards and expectations is the Housing Code of 2002 set forth by the City of Muncie. We are committed to being highly responsive to the housing needs of our tenants, as well as working in partnership with them to ensure that our properties are maintained in such a way that they contribute positively to the university-area neighborhoods.

II. Membership Eligibility / Criteria – A geographic area was defined as a criteria for membership. It was also determined that member must be committed to maintaining each property according to the association’s Minimum Set of Standards.

III. Voting Guidelines – The members agreed that each member shall have one vote reguardless of the number of properties owned.

V. U.A.L.A. Priorities – The following priorities were established and committees were formed to try and address these priorities.

VI. Anticipated 1st Year Expenses – The estimate for first year expenses was presented and the group agreed on $100 for annual membership dues.

The 1st year expenses will include: